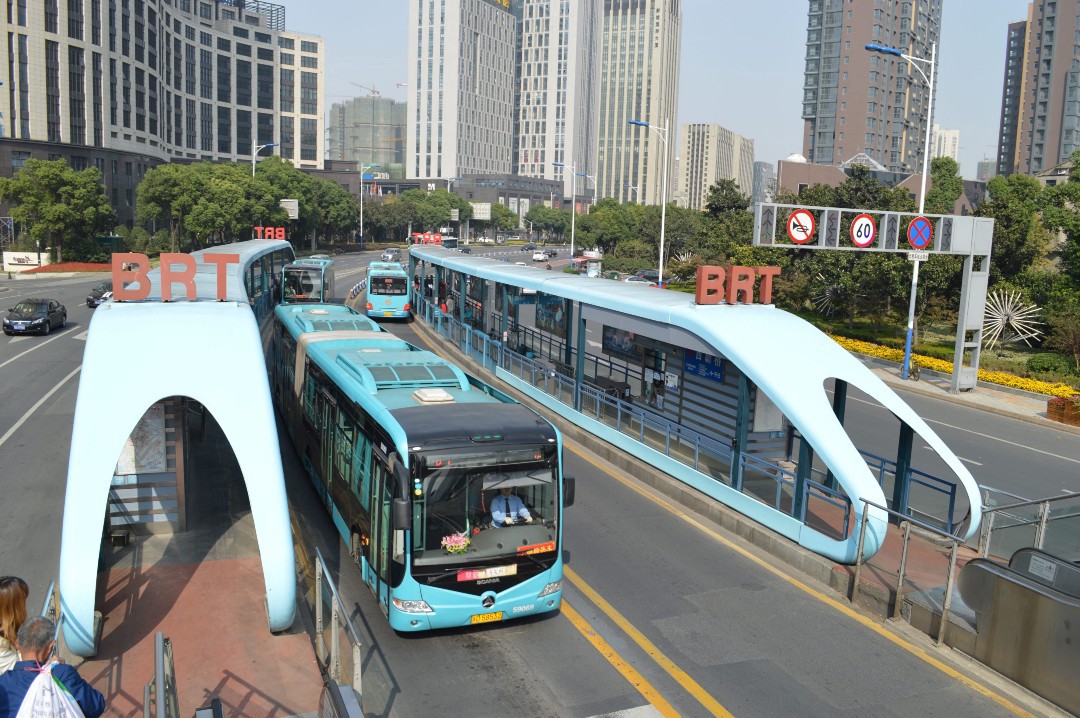 Gwinnett County, the soon-to-be-largest county in Georgia by population, is the state’s most diverse county – representing a microcosm of what the future of American politics and economic development could look like. 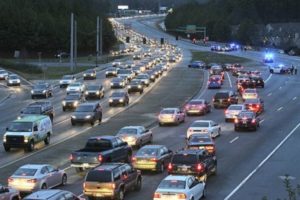 Peachtree Industrial Boulevard, in Gwinnett County, is one of the region’s most heavily traveled roads. Gwinnett intends to use technology to increase safety and mobility along a 20-mile segment. File/Credit: snipview.com

Gwinnett currently is a majority-minority county, meaning that no racial or ethnic group dominates its population. Gwinnett’s county-level leadership on the other hand is one of the most lopsided inversion of what the county actually looks like demographically.

It’s estimated by 2033, whites will no longer have a statistical majority in Georgia – falling to just under 50 percent. And by 2040, the whole state will be majority-minority, just like Gwinnett County is today. The United States as a whole is projected to be majority-minority by 2045.

The Atlanta Regional Commission estimates that the 10-county metro area will add 2.5 million people and 1.5 million new jobs by 2040. To handle such a surge in population, MARTA General Manager Jeff Parker has said the region will need $100 billion in transit investments over the next 40 years to meet the region’s needs.

By 2050, metro Atlanta could be the nation’s sixth largest metropolitan area compared to its No.9  ranking in 2017.

For the last three years, three elections have seen in Georgia have had voter turnout on par with a presidential election – the 2016 presidential campaign, the 2017 Congressional District 6 vote between Jon Ossoff and Karen Handel, and 2018 Gubernatorial election.

In each of these elections the number of young, minority and newly-registered voters has caused actual swings in districts that haven’t been competitive in years or in some cases ever. 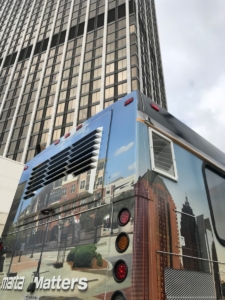 It must be noted, that the only reason a March 2019 vote exists instead of its original November 2018 slot is because the vote was delayed at the last minute to help protect incumbent Republican elected officials, but most of whom lost anyway.

Gwinnett’s growth and development has been possible for two reasons: first, the federal creation of highways, which deliberately destroyed Black neighborhoods and business districts and, second, white flight from the city limits caused the loss of economic development from Atlanta for the northern, segregated suburbs over several decades.

MARTA, was voted down in Gwinnett from its inception based almost exclusively on dog whistles concerning crime, density and property values – myths that still exists.

The last time Gwinnett had a vote on MARTA it was in 1990 and was resoundingly defeated. Since that vote 29 years ago, the county has more than doubled in population and is expected to grow by at least 50 percent within the next 20 years.

Despite common misconceptions, multiple studies have shown that transit doesn’t equal crime. And arguments of mismanagement at MARTA fail to account that MARTA has had a budget surplus for seven straight years.

I’ve been disappointed in the local television coverage of Gwinnett-MARTA vote, which has done less to actually educate voters on transit, density, costs or debunk myths about transit’s relationship to crime.

Crime in the suburbs has been on the rise because of the overall rise in suburban poverty. As the lack of affordable housing within I-285, combined with gentrification, lower cost of living and the lack of access to economic activity due to lack of a car.

I wish our local television stations would do better to explain how transit, transit oriented developments (TOD’s) and connected walkways all lead to an increase in property value versus the prevailing assertions. The easiest local example to point to is the Atlanta Beltline’s impact on property values the city of Atlanta. 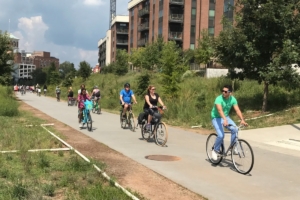 The Atlanta BeltLine provides a safe place for healthy exercise, even as workers say they try to avoid making health payments by skipping appointments and not purchasing tests and medicine, according to a recent report. Credit: David Pendered (2017)

Local television news programs have tended to report on polls or focus mainly on the opposition to the vote.

In Gwinnett, like most of metro Atlanta has reached the law of diminishing returns when it comes to building highways and expanding roads. For every new lane of roadway or highway built, there will be the same amount of drive time and an actual increase in traffic.

Additionally, I want everyone to know that buses do not equal more traffic. Atlanta is one the least dense major metropolitan districts in the US. Our car dependent roads make every traffic jam feel as if the city is full when in reality it’s the opposite.

The buses and rail being built are for reducing congestion now and also for the estimated 400,000+ new residents expected to move to Gwinnett by 2040.

Those efforts would eventually lead to the creation of the 13-county regional transit initiative, ‘The ATL’.

‘The ATL’ was given the support from outgoing Republican Governor Nathan Deal and even current Gwinnett County Commissioner Charlotte Nash has had to change her tune in supporting transit. 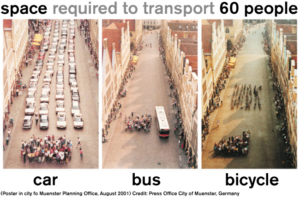 Gwinnett has lost high-profile corporate headquarters such as NCR because those companies wang to be located along the MARTA rail line in Atlanta for it’s ability to connect life outside of the car.

We should be connecting our region, and a train to Jimmy Carter Boulevard is a good way to start.

If voted ‘YES’, the next site for heavy will be at Jimmy Carter Boulevard and Interstate-85, connecting from the current Doraville MARTA station to the new Jimmy Carter Blvd station.

It must be noted that both Doraville and Jimmy Carter Blvd are both already developing for massive mini-city sized districts near these stations with MARTA serving as the linkage point between both.

So what is Gwinnett actually getting in this vote?

“In short, it’s a better deal than Clayton County which joined in 2014, Gwinnett gets three seats on the MARTA board and has more control than the Fulton-DeKalb-Atlanta had when it began at MARTA’s inception,” says Hicks. Hicks is working as the campaign manager of ‘Gwinnett on the Go’ a campaign being undertaken by the New Georgia Project Action Fund, the advocacy arm of the New Georgia Project – created by 2018 Georgia Democratic nominee for Governor Stacey Abrams. 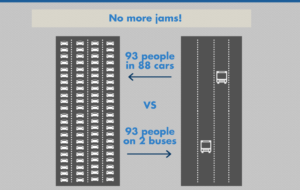 A popular bus-car meme floating around in varying urbanist domains

“If voted ‘YES’, MARTA will take over Gwinnett County Transit (GCT) on April 1st 2019, Gwinnett will then get expanded bus service routes and better hours” according to Hicks.

This will also expand the number of people within 1-mile of a MARTA transit point from the current 463,000 of 940,000 people and expand that to 763,000 of the 940,000 people in the county as outlined by the Short-Range plan. This will be done through an increase in bus routes, bus stops, dedicated bus lanes, expanded hours of service and Bus-Rapid-Transit (BRT) stations.

“The Mid-Range plan will see the first Light-Rail Transit (LRT) routes emerge, these will be similar to the Atlanta streetcar currently in downtown but spread across the county” according to Hicks.

“The Long-Range phase-1 plan would be the introduction of heavy rail which is currently only Jimmy Carter Blvd and I-85, which would be the connection point to the many projects currently proposed for that area” says Hicks. 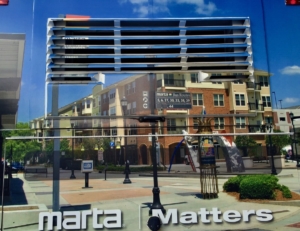 If voted ‘YES’, MARTA and Gwinnett County will work jointly on all projects with the adopted Gwinnett Transit Development Plan serving as the source of projects.

If voted ‘YES’, the combined sales tax rate for Gwinnett County, GA would be 7%, placing Gwinnett with 79 additional counties in the state that have the same rate of sales tax. The 1% sales tax collected over a 10-year period raising approximately $1.5 billion (in current year dollars), with an estimate of $150 million/year.

So what does that mean for regional transit?

If voted ‘YES’, this vote would be the domino falling for true regional transit and Cobb would be the next county where efforts would immediately shift towards.

According to Hicks, should a ‘YES’, vote happen the next potential route would be an East-to-West connecting line, going from Tucker-to-Smyrna.

Also according to Hicks, a ‘YES’ vote in Gwinnett could towards another referendum for transit within Fulton after a 2016 vote approving a ¾ penny sales tax was voted on.

In Clayton, the potential now of a Gwinnett-Clayton heavy rail MARTA trip is now on the table for riders, hopefully leading to more economic connectivity. This is in addition to a potential 22-mile line connecting MARTA’s East Point station to both Jonesboro and Lovejoy along the existing Norfolk Southern railways. 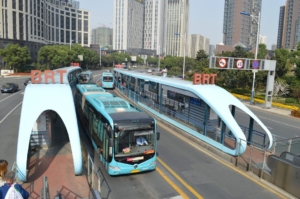 For DeKalb, this potential Tucker-to-Smyrna and Doraville-to-Jimmy Carter Blvd would cap off more heavy rail transit than ever in addition to the Emory light rail line currently in the works. This will also lead to a long a serious look at how to serve South DeKalb as this area of the county has historically never been supported by rail despite paying into the system since it’s inception.

Should a ‘No’ vote happen, it’s all back to the drawing board. This could lead to a new referendum to happen, potentially in 2020 or beyond, which could lead to a bigger level of ‘YES’ support during a presidential cycle.

According to Hicks, should a ‘NO’ vote happen, Gwinnett could also reach out to The ATL, and potentially strike a deal directly but even in that scenario MARTA would still most likely be the executor of service.

Will this be a vote for the future or a vote to hold on to the artificial ideals of Mayberry…?

The future of transit is pending on Gwinnett County, God help us all!

Gwinnett on the Go

Go Gwinnett! A transit advocacy group started by the county