Metro Atlanta residents are likely to see three changes fairly soon if state lawmakers vote for a hybrid of the two transit bills pending at the Capitol: MARTA vehicles and property may be rebranded; a new 50-cent tax could be applied to each trip in cab, limo or shared ride; and there may be a push for a sales tax in South Cobb County to provide a train, trolley or dedicated bus line to the Braves ballpark and nearby destinations.

Depending on the content of a law the Legislature could approve this session, MARTA may be required to place a prominent logo of ATL on its vehicles and properties, to acknowledge a proposed regional transit authority of the same name. Credit: MARTA

Of course, the intended outcome of the two pending transit governance proposals goes much further than these three notions. One bill is pending in the House and one is in the Senate. Any proposal that reaches Gov. Nathan Deal is likely to emerge from a conference committee, with members representing the House and Senate, and probably an unofficial advisor from the governor’s office.

For his part, Deal went on record as early as 2011in favor of a regional transit solution in metro Atlanta. Deal issued an executive order that created a task force of lawmakers and called on it to deliver proposed legislation by Jan. 23, 2012.

House Bill 930 states its purpose as no less grandiose than changing the single-car commuting patterns that created the patchwork of downtowns and suburbs so common among metro areas. Here’s the pertinent language from HB 930: 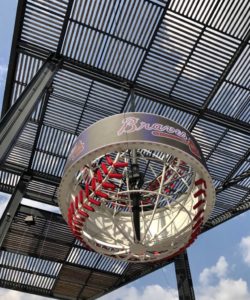 HB 930 is more extensive than Senate Bill 386. The House bill aims for a statewide makeover of Georgia’s approach to transit. The Senate bill appears more tailored to address the transit needs of metro Atlanta, though it does include provisions for transit systems elsewhere in the state. Both envision creating an entity named ATL to oversee transit services.

Details of the three transit notions outlined above include the following provisions. References to state law can be viewed at the Official Code of Georgia Annotated:

MARTA buses, train cars and property are to be rebranded, according to HB 930:

A 50-cent excise tax is to be applied to for-hire ground transport trip, which HB 930 defines as limousine carrier, ride share network service, taxi service and transportation referral service. Here are the provisions:

A potential transit line to SunTrust Park, where the Atlanta Braves compete, is contemplated in HB 930, though the park itself is not identified. The line also could serve other locations in the South Cobb Improvement District, which the bill defines in terms of voting districts in the Marietta, Smyrna and Vinings regions.

The type of system is defined only as “fixed guideway transit,” which the federal government defines as a system that operates along a dedicated path, whether it be rail, trolley or bus. Here are the provisions:

Another provision of the bill addresses the type of transit that could be built. This provision eliminates a state law that requires transit funding votes to be conducted countywide, rather than in a special district such as the one contemplated:

Previous Article
Finding volunteer opportunities just got easier!
Next Article
A new generation speaks, with the brashness of South Florida