Who should plan the park next to Atlanta’s controversial public safety training center?

A detail of the latest version of the Atlanta public safety training center site plan as shown in a Dec. 7 meeting. (Image by Atlanta Police Foundation)

Planning for Atlanta’s public safety training center is increasingly focused on adjacent parkland with no clear authority and no communication with groups who will include the green space in a South River Forest input process launching in January. One officer of the training center’s advisory committee calls the park discussion a “red herring,” distracting the focus of its review. 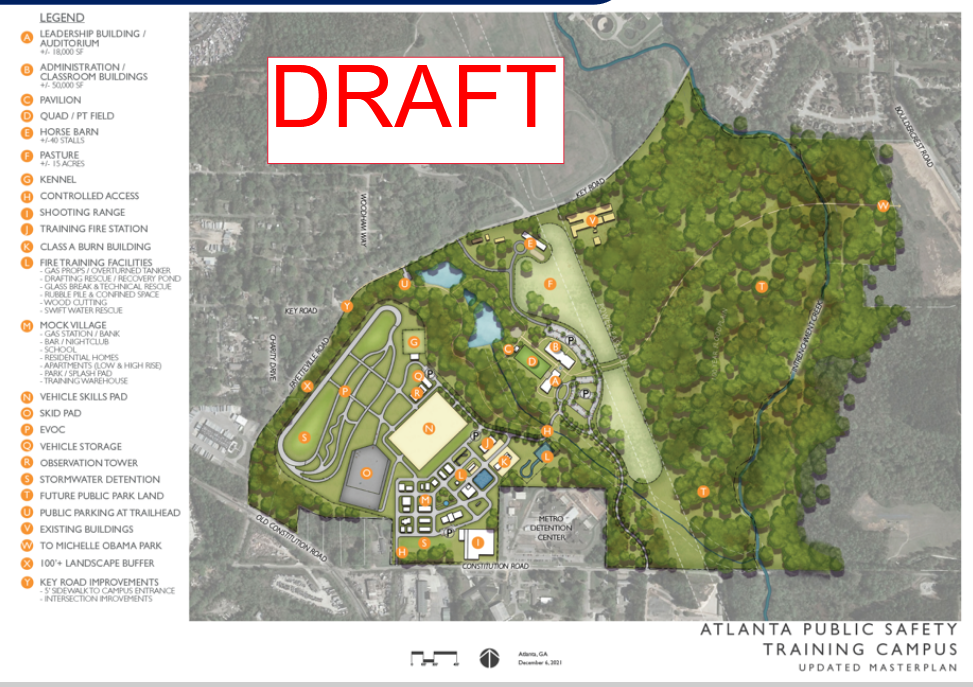 Meanwhile, the Community Stakeholder Advisory Committee (CSAC) continues to overlook some significant details of the training center plan, including an environmental study that appears to leave out a large section of the proposed site. And the final report of that study — said to declare there are no serious pollution problems — remains unavailable to the committee and the public as transparency issues continue.

The Atlanta Police Foundation (APF), which is leading the training center planning and running the CSAC, did not respond to questions, and neither did CSAC Chair Alison Clark.

Following a Dec. 7 CSAC meeting that was heavy on parkland brainstorming, Lily Ponitz, the group’s secretary, said the discussion seemed “disingenuous” because there is no involvement from City parks officials or any existing mechanism for creating the park, among other issues.

“I think it’s just kind of a red herring to get us distracted talking about stuff we would like, and they’re not going to make anything happen,” she said in a phone interview. “…You don’t have the owners here of this future stuff you’re trying to create.”

The Georgia chapter of The Nature Conservancy (TNC), an environmental nonprofit, and a community group called the South River Forest Coalition (SRFC) are working on the South River Forest concept, a City-approved vision for creating and connecting 3,500 acres of parks and other green space in Southeast Atlanta and DeKalb County. The Atlanta Regional Commission next month will launch a “Consensus Building and Stakeholder Engagement Project” for the concept, according to TNC Executive Director Deron Davis.

The role of the former Prison Farm in the South River Forest concept has been at the heart of the intense controversy over the training center plan since it was revealed earlier this year. The South River Forest was included in “Atlanta City Design,” a 2017 book created by the Department of City Planning as an aspirational vision for urban development. The Prison Farm, a City-owned, 380-acre site on Key Road within unincorporated DeKalb County, is a keystone of the South River Forest. 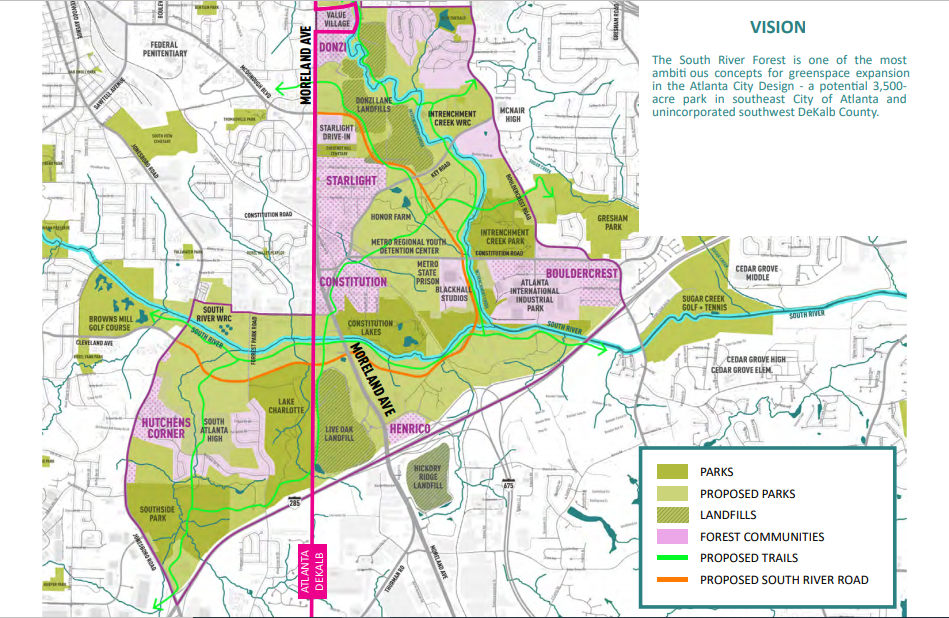 A map of the South River Forest concept as drawn by The Nature Conservancy.

The site once housed the Atlanta Police Academy and today is the site of the Atlanta Police Department shooting range and explosives detonation facility. Park advocates hoped to relocate those uses. But APF and City officials surprised them with the training center plan, whose site was secretly chosen and would vastly expand police and firefighter uses. TNC and SRFC were among the opponents of the idea in the ensuing controversy. Various opponents continue to call for the City to withdraw the lease and kill the project.

The City Council in September approved APF’s lease of the site for the training center, but with some concessions to the controversy. That included shrinking the training center’s footprint to 85 acres and mandating the creation of the CSAC, whose members were appointed by the council with some nominations by DeKalb officials.

Council legislation initially required that SRFC have membership on the CSAC, but they were removed in the final version. CSAC and APF officials indicated they wanted discussions focused on local impacts of the training center and to proceed from the standpoint of enabling, not opposing, its construction.

But now the CSAC is discussing the adjacent parkland after agitation from its own members and agreement by APF. Bob Hughes of HGOR, APF’s planning firm, solicited ideas like trails and playgrounds from the CSAC at its November meeting. That continued in the December meeting, where he sought input “as we look to plan portions of the park” and committee members talked of circulating surveys to the community. Hughes combined talk of possible public spaces on the training center site with brainstorming for unspecified portions of the adjacent green space, and appeared to allude to the South River Forest concept in saying, “I think what we do here is we’re implementing phase one of a bigger idea.”

Who can and will plan the park?

However, that raises a host of issues. CSAC has no legislative authority to review anything outside the training center, while APF has no ability to create and maintain parks, which it has said is the City’s job. APF has said nothing about how the CSAC’s parks-related input would be compiled or to whom, if anyone, it would be delivered.

The City and DeKalb did not respond to questions. Park Pride, a nonprofit that often assists in community visioning of Atlanta parks, has not been contacted, according to Executive Director Michael Halicki. He added that, while the site has potential similar to the City’s nearby Lake Charlotte Nature Preserve, “negotiating uncharted territory” like the Prison Farm discussions is not his group’s specialty.

There has been some talk of coordinating with other nearby park projects, but not directly with the South River Forest process, which has similar methods but much broader engagement and perspective. “This process will engage both residents and elected officials in an exploration process of the potential for this considerable green space, including examining case studies of similar areas elsewhere and reviewing regulations and policies in the City of Atlanta and DeKalb County affecting the area,” said David, the TNC chief.

And the CSAC so far appears to have ignored a legislative command to “engage with… environmental and habitat conservation organizations” – a reference to the SRFC and another community group, the South River Watershed Alliance (SRWA).

Allen Doyle and Joe Peery, co-managers of the SRFC, said they have not heard from APF or the CSAC. They raised a host of concerns, ranging from a lack of public contact information for CSAC members to the true size of the training center to the question of who would conduct an environmental study on the entire park area.

“Are these the people we should be trusting to design our public space? Of course not,” Peery said about APF. “Yet, that is what they are doing in these stakeholders meetings, with no input from SRFC or Save the Old Atlanta Prison Farm, groups that have been working with the community for years.”

“No one involved with this project has reached out to me. No surprise there,” said Jacqueline Echols, board chair of the SRWA. Her concerns included a lack of context about the unique nature of the training center proposal.

“What was the origin of the idea that a police training facility and a public park are compatible?” she asked. “Where are there examples, successful and/or unsuccessful, that support this most unusual and unproven experiment?”

Ponitz, the CSAC secretary, said the committee has not reached out to those groups, but that they have contacted her. She acknowledged she has been “very slow to get back to them,” while adding that it is “ridiculous it’s being put on us to speak offline with stakeholders who should have been on the committee to begin with.”

Another issue in the brainstorming is a lack of definition of what is meant by “the park.” The consideration of the adjacent parkland is based on APF’s environmental study of the training center site, which began when its footprint was much larger and extended farther east into the forest. While the site has been scaled back to 85 acres, the environmental study has continued with that original footprint, which now could contribute to the analysis of park uses. However, that still does not include all of the Prison Farm site, even though brainstorming talk often does so. 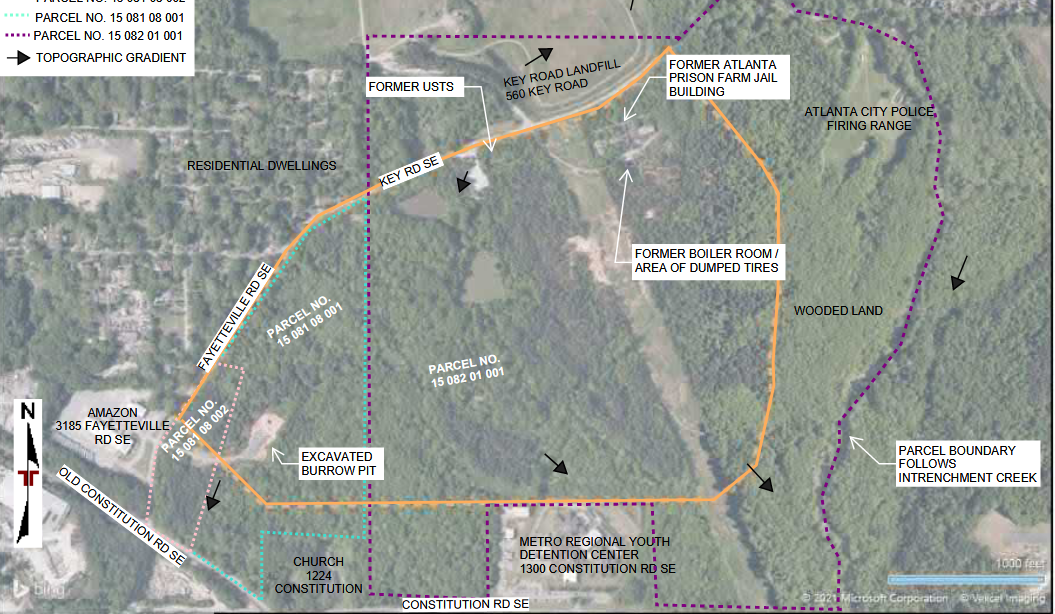 The CSAC apparently has not noticed another quirk of the environmental study’s outdated footprint. The latest training center site plan extends south to Constitution Road, where it places such facilities as a shooting range. But the environmental study did not include that area. Ponitz, a professional environmental engineer, said she had not noticed that until SaportaReport pointed it out and that it indeed appears the study left out that section. She said there is likely no legal mechanism that would require APF to study that area.

At the December meeting, the CSAC heard from APF planners that a “phase 2” of the environmental study found no serious pollution issues and no cause for any cleanup or further investigations. However, that report was not available to the CSAC, breaking a previous APF promise to provide documents to committee members prior to meetings. Marshall Freeman, the APF’s chief operating officer, said the report would be posted to the training center’s website. But Ponitz said on Dec. 24 that CSAC members still had no copy, and as of Dec. 30 – more than three weeks after the meeting – it was not on the website. APF did not respond to a request for a copy.

The CSAC’s next scheduled meeting is on Jan. 11.