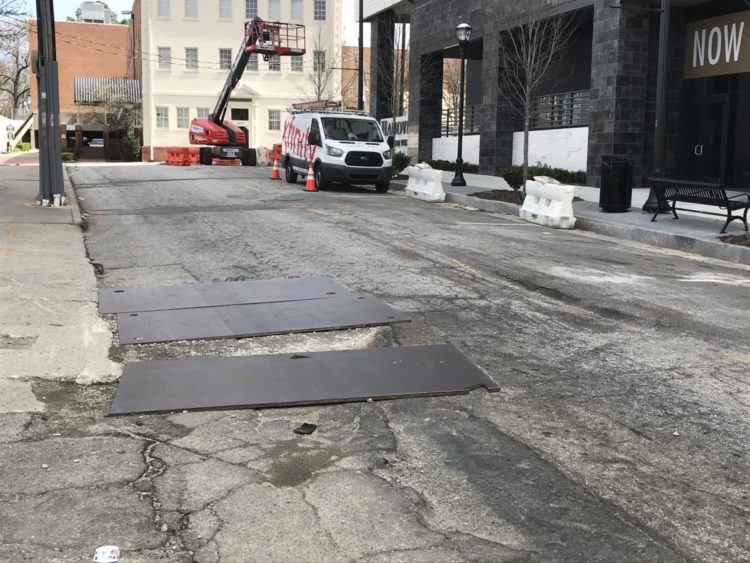 Atlanta Mayor Keisha Lance Bottoms says she’s going to create a new city Department of Transportation, which will take over road and transportation work from several other departments. The idea is to make a one-stop-shop, and better coordination, for all things road-related.

“These departments do a good job, but to do a great job they need to operate from the same playbook,” said Bottoms, speaking Thursday morning at her second annual State of the City address.

Right now, these transportation functions are spread among several departments. Public Works fixes roads. Planning designs them and thinks about where they should go. And the Renew/TSPLOST folks administer bond-funded spending on many things including transportation — and those two are working through how to cut projects after it became obvious that they wouldn’t have enough money for all the projects that voters were promised in 2015 and 2016. 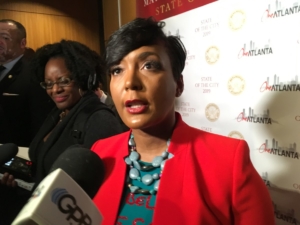 Atlanta Mayor Keisha Lance Bottoms on Thursday, just after her State of the City address. She says legislation is coming to start a city Department of Transportation. Credit: Maggie Lee

Bottoms, speaking after her speech, said that even when she was on Atlanta City Council, it was often difficult to know which of several well-intentioned departments was responsible for what.

“I remember being very frustrated even hosting a community meeting thinking I had the right department there and it was the wrong set of folks,” Bottoms said.

An Atlanta Department of Transportation “really is about consolidating the man- and woman-power that we already have throughout the city and making sure that we are able to deliver in the way that we should,” said Bottoms.

So, for example, the Department of Public Works would stick with other functions it has, like sanitation. But its road work would go under this new ADOT.

An ADOT is an idea that citywide Atlanta City Councilmember Andre Dickens has been looking at since 2017, starting with a feasibility study on the creation of it. His work will continue when he introduces the administration-endorsed legislation on Monday.

The legislation will include authorization for moving city money into an ADOT and for personnel to lead it, Dickens said. Hiring could start as early as July for a few staff for a commissioner who will then frame up the best way to move those existing city functions into the new ADOT.

“What we have right now is …we lack coordination,” Dickens said.

For instance, one department may pave a road, then a month later another department may authorize a utility or a developer to cut into the same road.

It should also become easier for grant-making or planning organizations, like the federal government, the state government or the Atlanta Regional Commission to understand what Atlanta is doing.

It’s confusing, said Dickens, “when grant applications are coming in from 3 or 4 different places in the city related to transportation and they’re each saying ‘We’re the best priority.”’

He’s also looking for a kind of bulk purchase savings when Atlanta lets larger contracts instead of several small ones for the same thing, say, for paving.

“It sounds like we’ll experience savings for sure and just more efficiency in how our projects get delivered,” Dickens said.

Clyde Higgs is president and CEO of the BeltLine, and he was one of a few hundred people watching Bottoms’ speech.  He said the BeltLine does already work with Planning and Public Works.

To have one point of contact could make it easier, Higgs said.

The leader of MARTA said something similar.

All the major cities he knows of have departments of transportation, said MARTA General Manager and CEO Jeff Parker.

Atlanta’s current organization isn’t a barrier, he said. But it will change how things work between the transit agency and the city during the buildout of new transit infrastructure just approved by voters.

“It will streamline a lot of the interface between the city and MARTA when it comes to More MARTA,” the building program, Parker said.