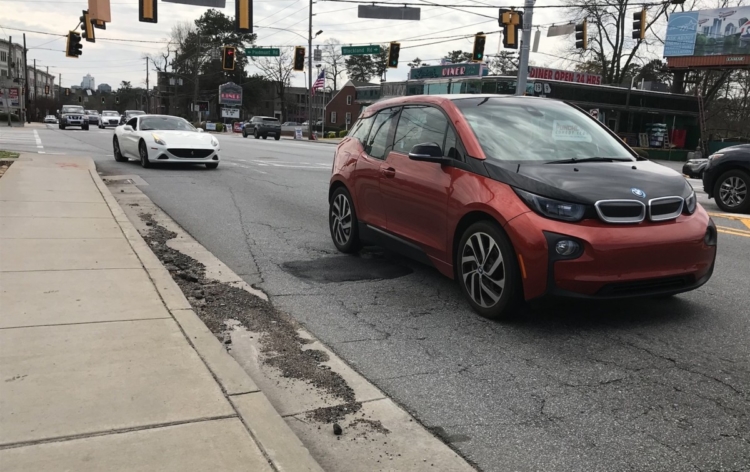 The task of pothole repair, and all aspects of Atlanta's mobility program, would come under a proposed Transportation Department that would report exclusively to the mayor. Credit: David Pendered

Atlanta’s proposal to create a freestanding Department of Transportation – reporting exclusively to the mayor – was part of the long-term plan suggested by the city’s management consultant, but only after a slow transition to a new department. The Atlanta City Council begins its deliberations on April 22. 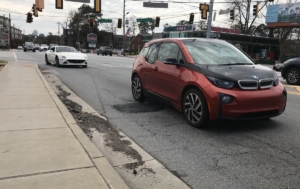 The task of pothole repair, and all aspects of Atlanta’s mobility program, would come under a proposed Transportation Department that would report exclusively to the mayor. Credit: David Pendered

Atlanta Mayor Keisha Lance Bottoms and a majority of the Atlanta City Council have endorsed the idea of a stand-alone Transportation Department.

They are skipping several interim measures the consultant suggested in a report issued last year – including a transition period of up to three years to evaluate if a new department, and its trappings, is even necessary. Tweaks to the existing governance structure might achieve the same results, the consultant observed.

The pending legislation calls for the mayor to wield exclusive control over the new department. The department is to be formed within a year. Here are a few details in the proposal: 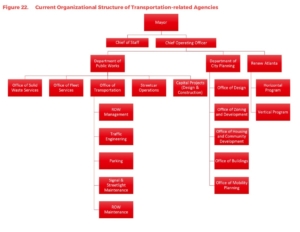 The management report was completed by the Atlanta office of WSP. The report, dated March 5, 2018 hasn’t gained much traction in the discussion over the type of governmental structure that could best ensure the city’s streets and sidewalks are well planned, well built and well maintained.

WSP may not be a familiar name in the region. An affiliate is more familiar to some in metro Atlanta. WSP purchased in 2014 Parsons Brinckerhoff, an engineering consulting firm. PB is a longtime consultant to MARTA and contributed to the MARTA Guide Specifications Manual. WSP | Parsons Brinckerhoff now is working on a MARTA contract to upgrade the ventilation equipment in 16 tunnels, according to a report by railwayage.com.

WSP’s report did recommend the creation of a “stand-alone transportation-focused department, led by a new commissioner hired from a national search.” In regards to timing: 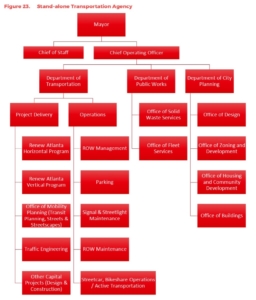 Atlanta’s proposed Transportation Department would report to the city’s COO under the recommendation of the city’s management consultant. Credit: WSP/Atlanta

The rationale for a multi-year transition states:

Such a transition period is not contemplated in the pending legislation. The proposal creates the department, enumerates its responsibilities, and authorizes the city’s chief financial officer to, “amend the Fiscal Year 2020 budget to create an appropriate fund, account and center number and to allocate appropriate funding for the creation of the Department of Transportation.”