MARTA’s potential partnership with Portman Holdings to develop the North Avenue Station could be the first in a new era of promoting transit oriented development around its rail stations. 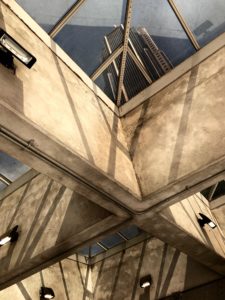 The Brutalist architecture of MARTA’s North Avenue Station, with its exposed concrete beams, evidently would be replaced by a glass and steel structure, according to Portman’s plans. Credit: Kelly Jordan

The potential deal has two firsts – MARTA’s first public private partnership, which in this case means Portman would pay $13.1 to rebuild the 1981 station; and MARTA’s first use of a new business model to tap into the value of air rights above a transit station.

MARTA’s board is to vote Thursday on a staff proposal to begin negotiations with Portman. The staff selected Portman in consultation with its broker on the property, JLL, a commercial real estate company with experience in urban projects.

Three primary components that favored Portman’s bid emerge from a MARTA presentation on the proposed deal. The three elements, and their contributions to MARTA’s broader development objectives, include:

Commitment to diversity and inclusion

MARTA’s goal is for 25 percent of the contract to be awarded to disadvantaged business enterprises. The state qualifies companies as DBEs when at least 51 percent of their ownership is by individuals who can establish they are socially or economically disadvantaged. Portman Holdings has contacted 130 DBE companies and has said it will hire a DBE consultant. MARTA intends to oversee compliance of the 25 percent goal through its Office of Diversity and Inclusion. 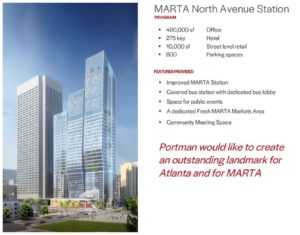 MARTA’s Board of Directors is slated to vote Thursday on a staff proposal that envisions a public private partnership. This structure is the same one the Georgia Department of Transportation is using to build highways projects around metro Atlanta, including the Northwest Corridor, the tollway along interstates 75 and 575. Advocates of P3 say it harnesses the strengths of the private sector to development of public infrastructure, often in the transportation arena.

The market triggered MARTA’s decision to offer the North Avenue site for development.

MARTA received an unsolicited proposal on the site in December 2018, Debbie Frank, MARTA’s TOD director, said in a May 27 presentation to the Atlanta City Council’s Transportation Committee. The committee has purview over the city’s relation with MARTA.

MARTA decided to put the project out for bid. MARTA’s board voted in April 2019 to release a request for proposals. MARTA hired JLL to bring to the deal its experience with urban projects. The RFP was released in August 2019. An initial due date in late 2019 was deferred to allow developers to consider the technical issues of developing a station that is to continue to serve bus and rail passengers. MARTA received RFPs in January.

MARTA’s due diligence on Portman’s proposal was conducted with in-house advisors and JLL staff of JLL, Frank said. 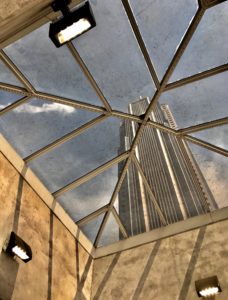 Technical challenges that prompted MARTA to delay the due date for RFPs by eight weeks included these areas: