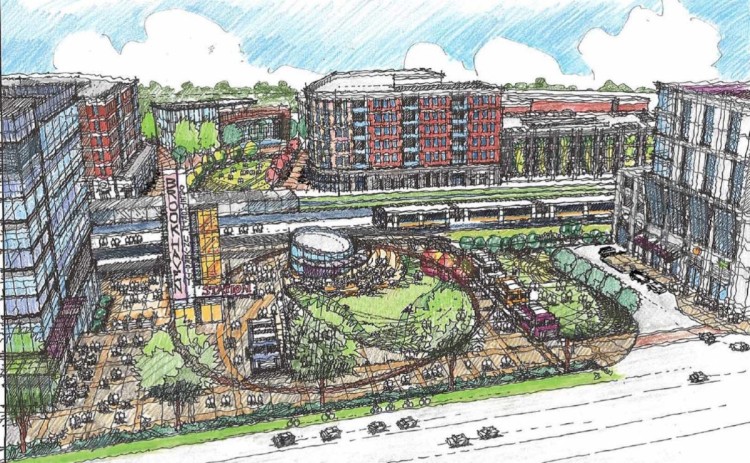 The planned mixed use development at MARTA's Brookhaven Station is to include a green courtyard. Credit: courbanize.com

The mixed use development planned at MARTA’s Brookhaven Station has been put on hold by Brookhaven city officials, who want to have a broader discussion about the area’s infrastructure before homes, shops and a hotel are built at the site. 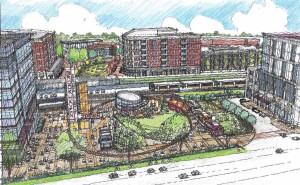 The planned mixed use development at MARTA’s Brookhaven Station is to include a green courtyard. Credit: courbanize.com

Brookhaven city officials want to talk about traffic congestion, infrastructure capacity and other regional issues that would be affected by development of the 15-acre site at the Brookhaven rail station, the city announced in a statement released Feb. 23.

Brookhaven wants participants at the discussions to include MARTA, the developer, Atlanta Regional Commission, Georgia Department of Transportation, DeKalb County, and unidentified state agencies, according to the statement.

These are the entities that formerly reviewed big proposed developments in the era before state development regulations were revised, in 2012.

Before the revision, a multi-agency review process was triggered when a “development of regional impact” was proposed. The state Department of Community Affairs downsized the review process in an effort to streamline government. 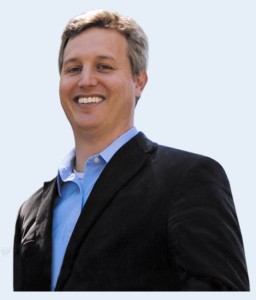 “I’ve heard residents’ concerns, and there are many unanswered questions regarding these plans,” Ernst said in the statement.

Ernst was elected last year and was sworn into office Jan. 4. Ernst grew up in Brookhaven and now resides in the Lynwood Park neighborhood.

“Any development at this site will have a big impact on our community for decades, and this process cannot be rushed,” Ernst said. “I’m pleased that all parties agree that we must plan smarter in order for this property to meet the needs of our city.”

MARTA did not issue a statement about the delay. The Brookhaven statement included a comment from MARTA GM/CEO Keith Parker.

“MARTA looks forward to continued discussion with all of our stakeholders,” Parker said in the statement. “We expect the Brookhaven TOD to be an excellent example of collaboration.”

MARTA hosted a meeting on Feb. 2 at the Brookhaven City Hall to discuss the planned development. More than 100 residents attended. MARTA also planned to convene additional meetings in each city council district. 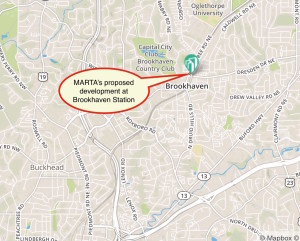 MARTA intends to provide a mixed use development on 15 acres at its Brookhaven rail station. Credit: courbanize.com

MARTA’s board voted in September 2015 to select as developer a partnership of Integral and Transwestern Development Company.