MARTA wants to engage a developer to build a live-work-play community in the 2-year-old city of Brookhaven, where a proposed 30-year plan appears to embrace dense urban development. 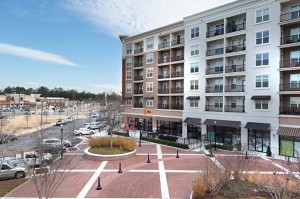 As MARTA seeks to develop its Brookhaven Station, the city of Brookhaven is poised to adopt a long-range plan that commends a similar development, Town Brookhaven, as a, “pedestrian friendly urban village.” Credit: sembler.com

MARTA is seeking developers for its Brookhaven Station. MARTA intends to develop homes, offices and shops on almost half the station’s sparsely used lot, and replace those parking spaces in structured parking.

The project may not be easy, according to a MARTA report that states: “The positive involvement of [Brookhaven and DeKalb County] could be a challenge to bring about. It will take careful negotiation and cooperation, of which ARC [Atlanta Regional Commission] could help facilitate. The largest hurdle, however, could be the participation of private money lenders.”

The Brookhaven City Council is slated to adopt Comprehensive Plan 2034 at its Nov. 18 meeting, following a final public hearing on Sept. 9. The plan was unveiled at a council meeting on Aug. 12.

For its part, MARTA has asked developers that are interested in the project to submit their qualifications by Sept. 18. MARTA will screen the responses and invite those that pass muster to submit their proposals at a later date.

First, MARTA will make money through long-term leases on the ground beneath the planned development. A report prepared for MARTA says MARTA could expect to collect $640,000 a year by leasing 10 acres. The price presumes land values in the area of $1.6 million an acre, according to the report by Bleakly Advisory Group. 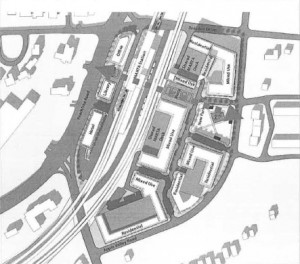 MARTA has provided this conceptual plan of the redevelopment of its Brookhaven Station. Credit: itsmarta.com

For developers, the benefit of entering a 99-year ground lease with MARTA is the lower cost of land. The lease rate of the ground lease would be 4 percent, compared to a debt rate of 6 percent if the developer were to finance a property purchase.

Second, MARTA expects a boost in ridership of its trains and buses once the development opens. That’s because a portion of the individuals who live in the homes, and work in or visit the commercial spaces, are expected to become transit passengers.

MARTA commissioned a market analysis in 2013 of potential development sites including the Brookhaven Station. The report determined the station could support the following components:

Previous Article
Married men live longer than their single counterparts. Men in general can take health for granted, need “medical home base.”
Next Article
Midtown Neighbors and NPU-E vote against 2014 Music Midtown festival application, but show will go on