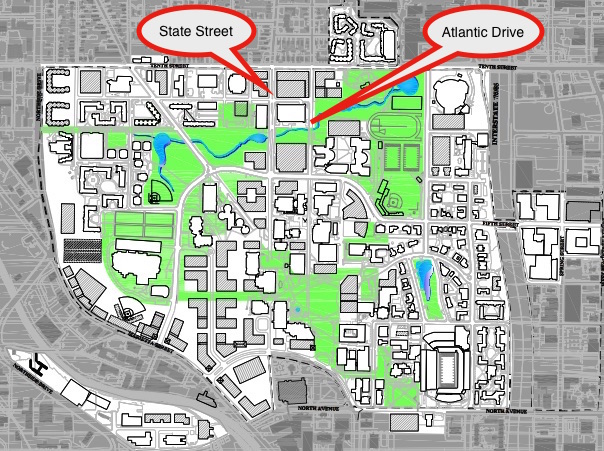 A committee of the Atlanta City Council voted Tuesday to help Georgia Tech advance its plans to improve the pedestrian nature of the central campus, while ensuring vehicles can still traverse the campus, as Tech pursues plans to create an Eco Commons that is to speak to Tech’s social and environmental ambitions. 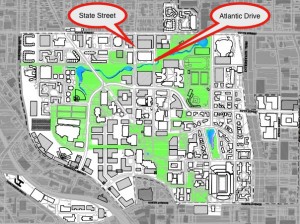 Georgia Tech’s campus master plan envisions an Eco Commons, shaded green. Atlanta is on track to promote the plan by abandoning to Tech State Street and Atlantic Drive, which will enable Tech to provide separate routes through its central campus for vehicles and pedestrians, bicyclists. Credit: Georgia Tech

The council’s Utilities Committee voted unanimously to abandon portions of State Street and Atlantic Drive to Tech. Councilmember Andre Dickens abstained after noting that he works for Tech.

Because of overwhelming support for the measure, the full Atlanta City Council is likely to approve it at the council’s June 15 meeting.

Councilmember Alex Wan voiced the only comment. Wan wondered why Tech was taking only a portion of Atlantic Drive. He suggested Tech’s plans to promote a pedestrian environment would make more sense if Tech took a larger portion of the road.

Tech has long-range plans to promote walking and cycling through its central campus, the area south of 10th Street to North Avenue, bounded by I-75 and Northside Drive. The plan includes an “Eco Commons,” which Tech’s 2004 update of the 1997 Master Plan describes as an area that:

Atlantic Drive and State Street are necessary to enable Tech to implement a portion of the plan.

Atlantic Drive is to be closed to vehicular traffic, according to the legislation approved by the Utilities Committee. The street is to be retooled to accommodate pedestrians and cyclists.

State Street evidently is to be expanded into a road that can handle both its current load, as well as the vehicles displaced by the pedestrian corridor created along Atlantic Drive. 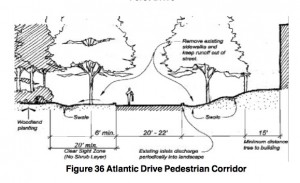 Atlantic Drive is to be converted from a vehicular roadway to a corridor reserved for pedestrians, bicyclists, and carts. It is slated to be a major node in Tech’s plans to create an Eco Commons that spans the central campus. Credit: Georgia Tech

According to Tech’s 2004 update of its 1997 Master Plan, Atlantic Drive is to be converted into a walkway. As a walkway, Atlantic Drive will be configured to comply with the following philosophy:

The Master Plan Update includes a graphic that shows a pathway in the middle of the existing Atlantic Drive corridor. It measures from 20 to 22 feet in diameter. Existing sidewalks will be removed, and steps taken to prevent storm water runoff from draining onto the walkway. Trees will grow beside the walkway, but no shrubs will be allowed – perhaps to remove potential hiding places for near-do-wells.

The 1997 Master Plan portrays State Street as being converted to a boulevard. As such, it would have the capacity to handle its current workload, as well as vehicles that will be bumped off Atlantic Drive.
Tech’s master plans recognizes the need for vehicular access to the central campus, even as the campus transitions toward a pedestrian/bicycle-friendly atmosphere.