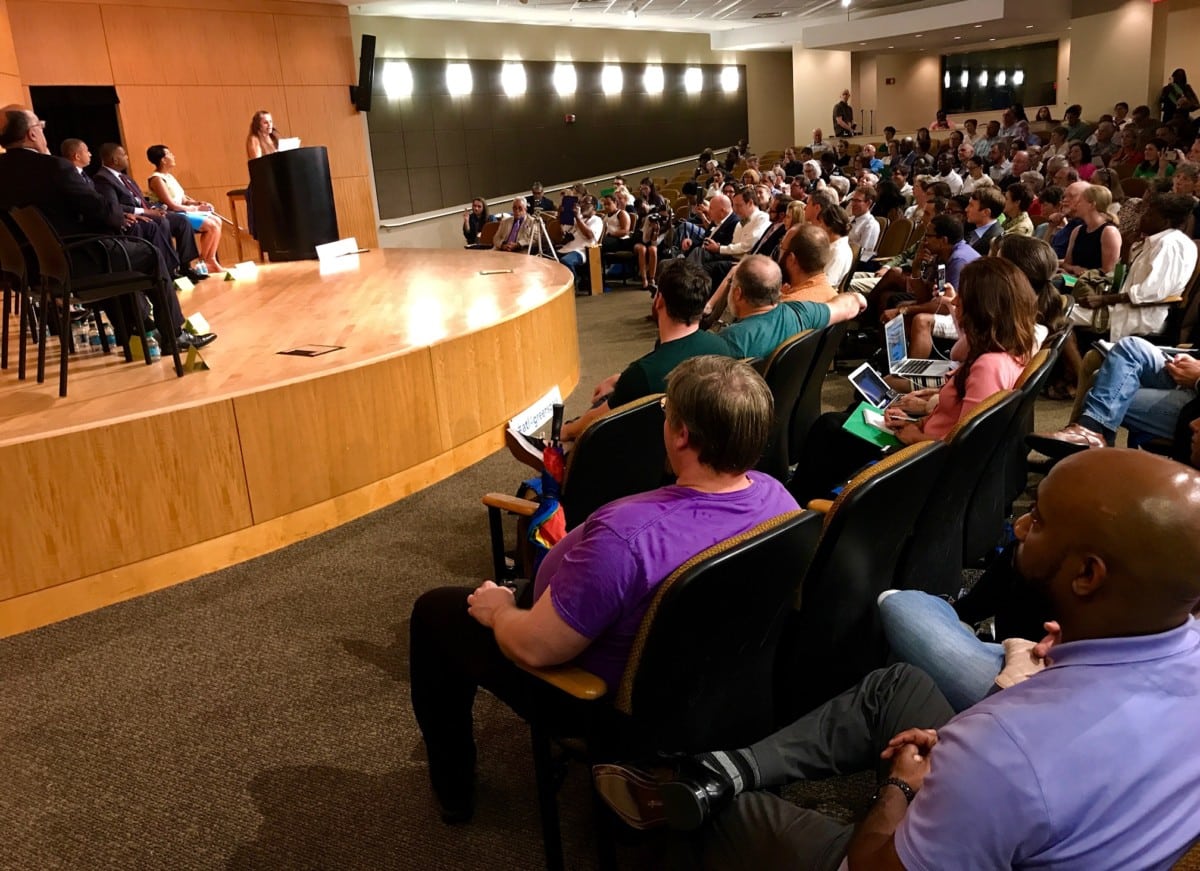 The organizers of an Atlanta mayoral candidate forum on green space Thursday night had to move their event to a bigger auditorium — their first venue couldn’t hold everyone who wanted to know more about what the political hopefuls propose for the city’s trees, watersheds and parks.

So on a Georgia State University stage, 10 mayoral hopefuls sketched out green visions for a crowd of nearly 400.

All the candidates broadly support more finding more money for parks, more green space, and making sure there’s greater equity among Atlantans when it comes to good access to top-quality outdoor spaces for walking, playing or just chilling.

All also want to strengthen the tree ordinance — the city law that sets out when people can chop down trees and what it will cost them in fees. 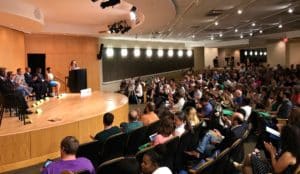 Indeed, there’s enough alarm over tree clearance and Atlanta’s shrinking tree canopy that City Council recently passed a temporary pause on all applications to destroy more than 10 trees on residential parcels of land that are five acres or larger.

But the candidates did stake out their own spots even as they stayed in the same camp of broad support for a leafier Atlanta. And on the question of equity, several candidates mentioned the role of parks and green space in driving up property values — and pricing some folks out.

Former Atlanta COO Peter Aman said that paying attention to equity is one of the most important things Atlanta can do as it focuses on the parks and recreation budget. He also talked about making sure parks, green space and recreation are part of the very fabric of the city.  “The tree canopy is vital and we have to protect it. But it’s not just about the tree canopy, it’s about the people and what makes people happy,” Aman said.

Candidate Al Bartell said that his commitment would be for Atlanta to be a part of the United Nations’ world environmental strategy. And he very much disagrees with President Donald Trump’s decision to remove the U.S. from the Paris climate accord.  “That’s the worst decision he has made and probably the worst one he’ll ever make,” said Bartell.

City Councilwoman Keisha Lance Bottoms said she’ll pitch funding for new green spaces like they do on Marthas Vineyard: “When you purchase a home, two percent [as a transaction surcharge] is set aside for the land bank, and green space is purchased on behalf of the island. So I think something like that would work well within the city,” she said. Bottoms also said that she’d work with Atlanta Public Schools to develop a school that focuses on environmental justice and education.

Atlanta state Sen. Vincent Fort said that equity has to be a central theme in every department in the city of Atlanta. “Unfortunately …  much of the city’s green agenda has added to gentrification, has added to the fact that the city has become more unequal over these many years.  The fact of the matter is the Beltline has not followed through with its commitment on affordable housing,” said Fort, who has run as a City Hall outsider.

Atlanta City Councilman Kwanza Hall also said that equity would be a theme his administration and that the city is gentrifying through its green investments. “We know that the investors from around the globe, they buy wherever our investment has gone; (with the) Beltline and TSPLOST (transit spending.) So we ned to be very considerate about how our actions affect our city. I’ve felt it in the Old Fourth Ward and we’ve done some things to prevent it but I think theres some bigger things we need to do throughout our city,” he said.

(Hall also walked back an April remark of his, when he said he had a “question mark” over global warming.   Thursday night, Hall said, “We all make mistakes in our statements and I accept that one.”) 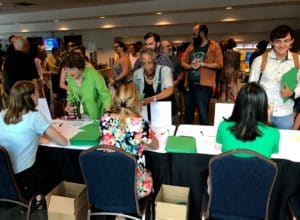 Audience members line up for sign-in and name tags ahead of the forum. Credit: Kelly Jordan

Atlanta City Council President Ceasar Mitchell said he that he worked to get principles of equity, of affordable housing and community benefits written into Beltline legislation and would continue work in those areas.  As for parks funding, he told the audience, “what I’m going to do is … find a dedicated funding source that we will not lose and then … ask you, all of you in this room, to be the experts and give us the answers on what we do.”

City Councilwoman Mary Norwood said her big idea is “focusing totally on the preservation of the canopy.”  And the audience was apparently full of folks who prefer cozier homes; she had to pause for applause after she called out chopping down trees for big houses.  She called for “everything from conservation easements for all of those acres in trees that are in private hands, to not oversizing houses and wiping out acres and just paying a fine … to acquiring new green space with ‘East Side Park,’ which is what I call the Prison Farm.”  That last one is a reference to a surprisingly bucolic abandoned prison farm in southeast Atlanta.

Former Atlanta Workforce Development Agency Executive Director Michael Sterling said that equity has to be at the top of Atlanta’s priority list.  “We saw that inequity had gotten so bad along the Beltline corridor … that … the person that came up with the idea himself quit the Atlanta Beltline board,” said Sterling. “I cast my candidacy in opposition to the status quo, the status quo that has allowed this type of inequity to build in our city and turned us against each other,” Sterling said.

Former City Council President Cathy Woolard said the reason she got into the race was equity — or lack thereof — along the Beltline, a project that got its first City Hall foothold in her office. “My concern has been as I’ve watched the Beltline develop, and in some cases not develop, is the poor quality of design, the lack of taking the opportunity to use land we own to build affordable housing and other amenities that people need in the communities,” she said. For another big idea, Woolard said she’d like to see proposed trails that have come up in the last few years  — like Chattahoochee Now and Proctor Creek — built and linked into a regional network that could see folks bike on paths from Atlanta to Alabama.

A Facebook Live video of the event is available on Park Pride’s page.

The top nine fundraisers in the mayor’s race have already reported more than $7 million in campaign contributions and loans.