MARTA’s planned Summerhill Bus Rapid Transit project – a potential game-changer in metro Atlanta transit – is poised to take a major step forward with the hiring of a consultant to oversee final engineering and design. 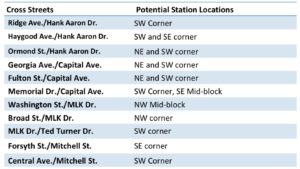 MARTA has selected 11 locations for stations on the Summerhill BRT route. The locations could change during final design, MARTA observed. Credit: MARTA

This project is the first foray into bus rapid transit for both MARTA and other regional transit operators considering BRT programs. MARTA’s first instruction to contractors reminds them of their role in making history. MARTA asks that all the architectural and engineering services be prepared so that they “could be replicated in future BRT corridors.”

The deadline is Friday, Nov. 13 for consultants to submit their materials to MARTA. No award date appears to be provided in MARTA’s Request for Expressions of Interest. MARTA did note that meetings with firms that make a shortlist could be conducted between Dec. 22 and Dec 29.

Terms call for disadvantaged business enterprises to receive at least 15 percent of the sum paid to the consulting entity. The contract is to last three years and could be extended. Subcontractors are to pay smaller subcontractors within 10 days of the day they receive payments from MARTA. 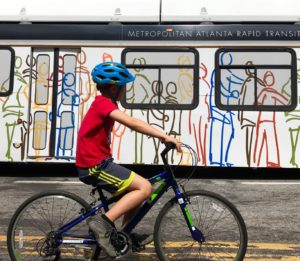 MARTA is moving ahead with the Summerhill BRT route. MARTA is advertising for an entity to complete the final engineering and design plans on the route that is required by a federal grant to open by August 2024. Credit: Kelly Jordan

The consultant, or team of consultants, to be hired is not responsible for building the project. This task is to complete detailed engineering and design work that’s necessary for the project to be built. This consultant is to help prepare bid documents for actual construction.

Utilities, for example. The consultant is to devise a plan for relocating all utilities that may need to be moved to allow for a station to be built. Likewise, the plan must provide for the upgrading of utilities that would not support a BRT station, according to the REI.

Roadway drainage is another concern. Station platforms have to be designed in such a way that customers aren’t splashed with road-spray while standing on a platform to await a bus. In addition, storm drains in streets will have to be redesigned to reduce wear and tear on both the vehicles and the roadway, according to the REI. The federal EPA has already reviewed the project and determined that a storm water permit is not required to complete drainage work other than at the last southern station, according to the REI.

Traffic signals are an engineering concern. Consultants are to make certain that traffic signals can be told be green when BRT vehicles approach an intersetion. This requirement is spelled out in the REI: 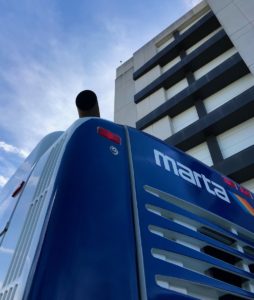 MARTA buses are to be able to turn some traffic lights green in order to help them move expediently in traffic in Downtown Atlanta. Credit: Kelly Jordan

Public art is to be accommodated. The consultant is charged with designing BRT stations so they can handle any future MARTA Art Bound program that may offer enhancement possibilities to proposed amenities, according to the REI.

BRT programs are being adopted by transit systems in part because they are a lower-cost option to heavy rail systems, such as MARTA’s trains. Heavy rail remains preferred by some urban planners, who contend that its permanence gives lenders a sense a security that any loans they make for commercial and residential projects near a transit station will be repaid.

The lack of permanence, or flexibility, is a reason other urban planners favor BRT. If market conditions change and an area served by BRT becomes a ghost town, the financial loss of downgrading the public transit service is less than if a heavy rail had been installed.

MARTA on schedule with Summerhill BRT in Downtown ATL