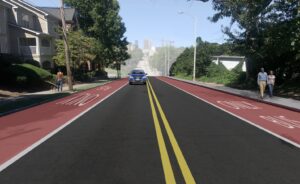 The board authorized a contract with a consultant to advise on the acquisition of right-of-way for the planned route. The land is to be secured by winter 2022, as that’s the planned start of construction.

The right-of-way acquisition process involves a corridor lined with a collection of government buildings, in Downtown Atlanta, and privately owned properties along Hank Aaron Drive that have the potential to rise in value. The BRT route is to provide reliable transit times on the route  between the Atlanta BeltLine’s Southside Trail, workplaces in Downtown Atlanta, and in developments related to Georgia State University’s Center Parc Credit Union Stadium.

The route shows the BRT connecting the south side of MARTA’s Five Points Station, along Martin Luther King Jr. Drive, with the southern end of Hank Aaron Drive, near Carver High School and D.H. Stanton Park.

This project is regionally significant in addition to its local importance.

MARTA’s Summerhill BRT is a high-visibility test of BRT as a means of improving mobility and air quality in metro Atlanta. BRT access is central to the state’s plans to retool I-285 and Ga. 400. 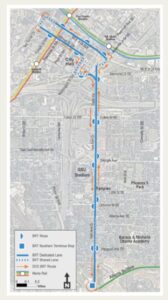 MARTA’s Summerhill BRT is to link the Five Points Station area with the Atlanta BeltLine’s Southside Trail. (May from itsmarta.com)

The expectation is that more passengers will commute in Atlanta’s northern suburbs by bus as trip times become more reliable when buses travel in dedicated lanes. That has proven the case along the Northwest Corridor, I-75 and I-575, Tim Matthews, the express lane administrator for the Georgia Department of Transportation, said at the Oct. 7 meeting of the ATL, the regional transit planning agency. Though the Ga. 400 express lanes are delayed, providing express lanes for transit remains a cornerstone, Matthews said.

“The express lanes will serve as the backbone of transit in this corridor,” Matthews said, referring to BRT on Ga. 400. ““Whatever we do on 285 is going to reflect our notion of transit on this corridor [Ga. 400].

MARTA officials say they recognize the potential impact of BRT on the region and to residents who live nearby.

“This is our first BRT project in Atlanta and one that will transform the way people view bus transportation,” MARTA Chief of Capital Programs, Expansion & Innovation Manjeet Ranu said in a statement. “We are eager to share our progress with those who travel this vital corridor and with the communities surrounding it.” 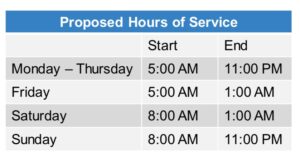 MARTA intends the Summerhill BRT to offer early morning and late night service, according to this proposed schedule. (Image from itsmarta.com)

MARTA continues to add details about the project, priced at $68 million with $12.6 million from the Federal Transit Administration, a MARTA spokesperson wrote in a Tuesday email.

MARTA’s two public meetings on the project provided details including