Editor’s Note: This is the final installment of four stories this week that look at topics likely to appear on devices and news platforms in metro Atlanta in 2020.

Transit funding is poised to emerge in 2020 as a major discussion in Atlanta, DeKalb and Gwinnett counties. In addition, Atlanta is slated to try again to revamp traffic movement in the central business district, regulate e-scooters and possibly reduce the city speed limit to 25 mph – even as a push for transit on the Atlanta BeltLine remains in the mix. 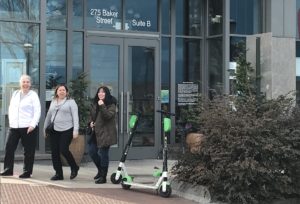 Atlanta city officials are likely to start mulling in public about whether to ask voters to extend the existing sales tax for transportation. The tax of 0.4 percent expires April 1, 2022, which suggests a referendum will be called for some date in 2021. The biggest local office on the November 2021 ballot is mayor; incumbent Keisha Lance Bottoms was elected in 2017. Atlanta already has called a March 24 referendum to ask voters to extend a 1 percent sales tax to pay for sewer improvements.

Gwinnett County officials are weighing the timing of another vote on entering an agreement with MARTA. Some civic leaders have suggested putting a transit referendum on the ballot in November. The biggest local office on that ballot is the open chair of Gwinnett’s Board of Commissioners; incumbent Charlotte Nash is not seeking reelection to the post she’s held since winning a special election in 2011.

DeKalb County officials are considering calling a transit sales tax referendum this year. DeKalb commissioners set the stage in July 2019 for a transit vote by adopting a Master Transit Plan. The biggest local office on the November ballot is the county’s chief executive officer; incumbent Michael Thurmond was elected in 2016.

These potential conversations are to follow the expected adoption this Spring of a 30-year Regional Transportation Plan. The plan outlines spending of an estimated $174 billion to improve mobility in metro Atlanta through 2050.

The Atlanta Regional Commission is expected to approve the RTP in February, followed by GRTA in March. The federal Department of Transportation also must approve the plan.

Even before the first signature has graced the RTP, advocates of transit along the BeltLine already are planning to seek to amend the plan to include BeltLine transit.

BeltLine Rail Now is eyeing proceeds of Atlanta’s potential sales tax referendum as a way to fund transit along the BeltLine. This amendment would be allowed if a funding source were attached to the project, according to the organization. 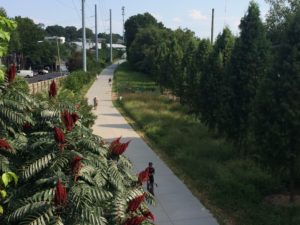 BeltLine Rail Now contends a transit system should be built in the BeltLine corridor, as was promised in the initial program. Credit: David Pendered (2016)

Other major initiatives in Atlanta include:

MARTA buses bear the logo of the ATL as they transport riders around the region. Credit: Kelly Jordan

Previous Article
Top Georgia House Republican: a fan of film tax credit, not so much of Atlanta airport takeover
Next Article
Fulton puts budget on hold